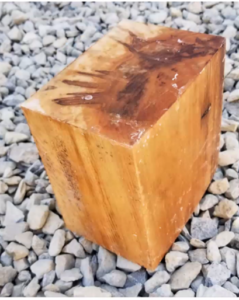 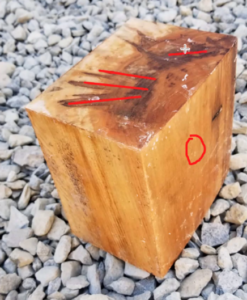 Ambrosia Maple: The graining would look best on the sides of a bowl rather than on top. Some members mount it on a screw chuck or a faceplate for larger pieces. Cut the radius with a band saw to see the outside rim and then decide what’s best for the top and bottom. It is waxed so treat it like a green bowl that could distort. Let the grain make a smile rather than a frown. Besides a bowl, it could be a lid that shows a lot of activity if it fits with a piece. The red circle shows where it would be mounted to the screw chuck or faceplate. (We learned how to play with marking photos on zoom. 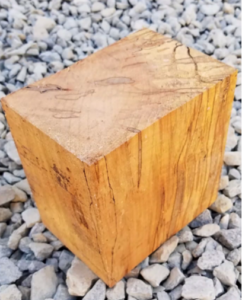 Also Ambrosia Maple: This piece has some obvious cracks. Figure out which areas might be turned off or could cause problems. Draw a circle around the more usable part and cut out that part with a band saw before turning. 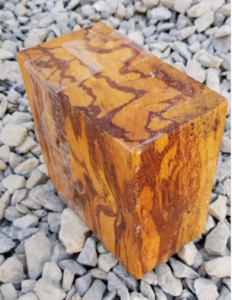 Marblewood: It is waxed also so maybe green wood. Put it outside for a night and another member may come and steal it. Nice piece. Either make a nice figured bowl or cut it in half to make two vases for two pieces of beauty. 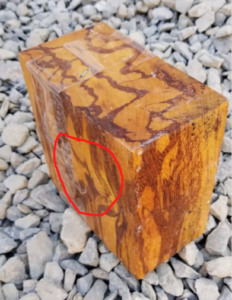 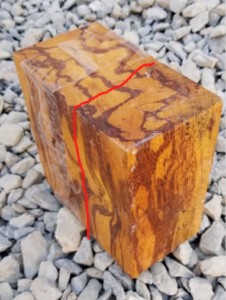 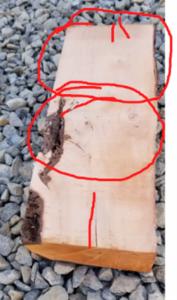 Pear: This piece has cracks and  bark inclusions. It’s possible to make a platter, a bowl, and some smaller things by cutting it into pieces. Glue up cracks or use a filler with CA.

Side discussions: *When there is a green wood log, is it better to leave it green and seal the ends before putting it in the shade to dry or cut out blanks? It can still split. It depends on the type of wood. Some may crack at the ends but then is okay in the center of the log. An example was given: pinon pine has few cracks but aspen can split easily. All woods are different and react differently. *It may help to cut off a piece green, make something and see what happens, whether it distorts or keeps its shape. That can help a turner know what might happen with the rest of the wood. *Some people do double turning, rough turning it green then returning to finish it. It’s harder to go back to it and can be better to just finish it the first time. *A microwave can be used to dry wood but not a kitchen one! A member dried an orange tree piece in the kitchen microwave which smelled up the whole house. Avoid that…have a separate microwave for wood in the shop. *The App, “Picture This” can help with tree identification if the leaves and bark are present. 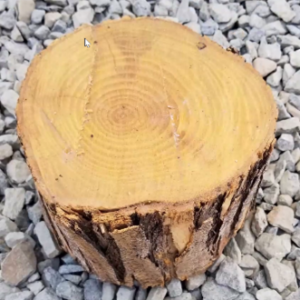 This ‘found wood’ shows by the growth ring that it was a fast-growing tree that had lots of water. It may not be dry and may crack while turning. It may make two bowls if it is cut across by following the crack. It’s limited to a 5-inch bowl if the pith is cut out. Another option is to make a bowl but shape the bowl so that its foot is narrower at the bottom to limit the pressure on the pith so it may not crack. It has a yellow color…it’s not ponderosa pine, but could be a black locust, mulberry, or osage orange? 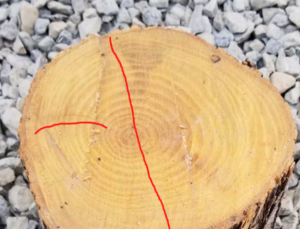 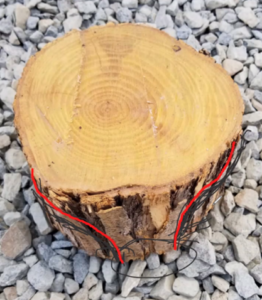 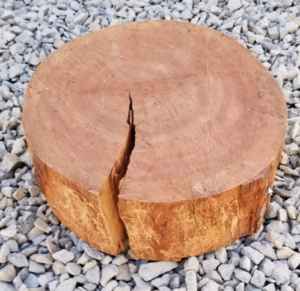 Found wood: Some members said they’ve seen a similar crack in Ponderosa pine. The group discussed different ways to mount a piece like this on the lathe. 1) One member turned a similar piece by turning it first, then filling the crack with CA and metal shavings. He held it with an expansion chuck at a fairly low speed, 500 rpm then up slowly toward 1000 rpm. He used a drill press with a Forstner bit to bore a shallow recess for the expansion chuck size. (left photo below) Using an expansion chuck, in this case, is an advanced skill due to the size of the crack. The advantage is that projects can be remounted on the lathe, which isn’t possible if a tenon is turned off. 2) Holding it with a faceplate was considered safer, with a larger one for bigger pieces. It was suggested to drill holes smaller than the screws. A downside is that screws can cause more cracking. (right photo below).

The safety recommendations were: Use caution in using the lathe speed is safe for you. Sharp tools are necessary for the task. Know where to stand, where it could ‘fly’, and know what’s safe for you. Know your safe level of ‘intestinal fortitude.’ Put the tape around an area to keep it safe. Have first aid nearby. 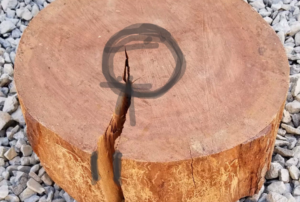 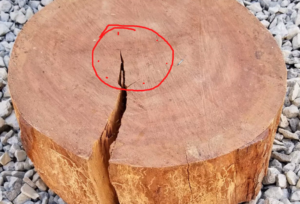 These were opposite sides of the same log. It was suggested to cut out the middle to make a bowl and then make something shallow from the cut-off ends. When cutting out the center, it may not have the cracks that are found in the end pieces. 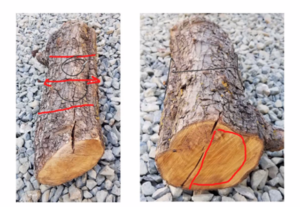 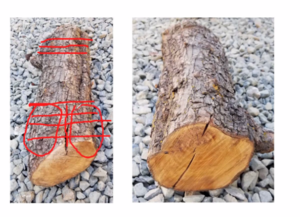 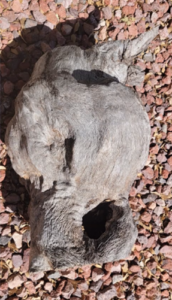 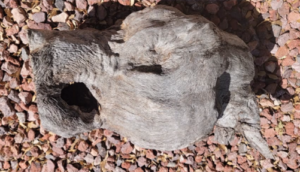 One of our members sent in this photo and we decided to wait and talk about it when he’s available. Until then…is it a snarling dog or a marching elephant?